Two acclaimed country artists, one unforgettable show! Alison Krauss teams up with iconic singer Willie Nelson for the country event of the year, coming to Mountain Winery Amphitheater on Monday 6th August 2018! As always, the talented twosome, who have toured together in previous years, will be joined for their sets by their phenomenal backing bands (Krauss with the Union Station and Nelson with his family band)! An unmissable event for any country fan! 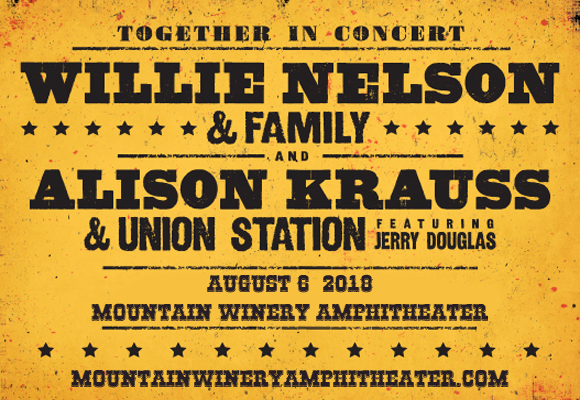 Finding huge success in the mid-late 1970s with the albums Shotgun Willie (1973), Red Headed Stranger (1975) and Stardust (1978), American musician, singer, songwriter, author, poet, actor, and activist Willie Nelson is one of the most recognized artists in country music. Nelson began his career in the late-1950s, writing songs that would become country standards, including "Funny How Time Slips Away", "Hello Walls", "Pretty Paper", and "Crazy". After the success of his debut album, …And Then I Wrote (1962), Nelson signed in 1964 with RCA Victor and joined the Grand Ole Opry the following year. A prolific artist, Nelson has released roughly one album a year since his debut. Nelson was also a member of the country supergroup The Highwaymen, along with fellow singers Johnny Cash, Waylon Jennings, and Kris Kristofferson.