Regarded as one of the most iconic rock bands to exist, The Beatles have marked history since the '60s through classic global hits that carry on for generations to come. The Fab Four – The Ultimate Tribute is set to keep The Beatles' legendary craft kicking and running as they stop by for a show at Mountain Winery Amphitheater on Friday, June 24, 2022. Let The Fab Four lead you back to the 60s as they perform as carbon footprints of Paul, John, George, and Ringo. Get ready to get up, sing, and dance along to The Beatles' greatest hits that are set to live on. Book your tickets now! 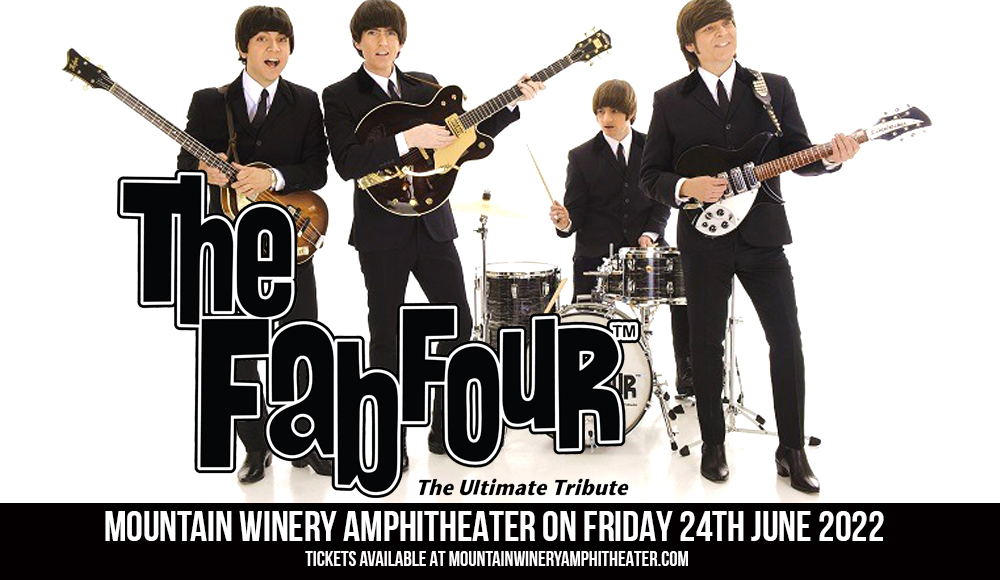 Paying homage to The Beatles, The Fab Four takes on the mission of keeping the legends' music alive for generations to come. Based in California, The Fab Four has performed in venues across the globe including Japan, France, Malaysia, Hongkong, the UK, Australia, Germany, and many more. They've covered nearly the whole Beatles catalog throughout their journey.

More than just another cover band, The Fab Four have set themselves to be carbon copies of Paul, John, George, and Ringo, mastering their mannerisms and outfits across all The Beatles' eras. Audiences are taken on a journey back to the 60s as they replicate every detail that makes every show feel authentic.

Indeed, The Fab Four is definitely the ultimate tribute band that keeps the legends alive. You can expect them to play the Beatles' biggest hits and fan favorites like "I Want to Hold Your Hand", "Help!", "A Hard Day's Night", "Lucy in the Sky With Diamonds", "Twist and Shout", "Here Comes The Sun", "Let it Be", "Hey Jude", and many more.

The Fab Four is highly acclaimed for their alluring stage performances and costume changes that showcase each Beatles era, taking fans on an immersive ride back to the 60s.

As 2022 marks the big return of live concerts and tours across the country, 'here comes the sun shining its way to Mountain Winery Amphitheater as The Fab Four brings The Beatles' best hits back to the stage as fans are led to sing and dance like it's 1969. Book those tickets now!