An iconic band that needs no introduction, The Beach Boys will be performing at Mountain Winery Amphitheater on Sunday 16th September 2018! Playing as part of their Now and Then Tour, the group will be bringing along their classic sunshine hits like "California Girls," "Fun, Fun, Fun," and "I Get Around," spreading heaps of "Good Vibrations!" 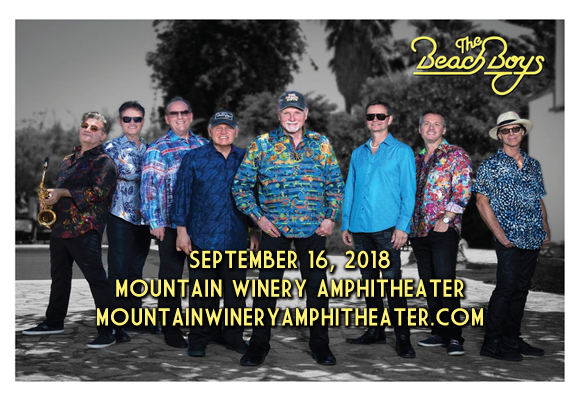 Led by principal songwriter and producer Brian Wilson, The Beach Boys are one of the world's best-selling bands of all time. The group rose to fame in the 1960s with their signature close vocal harmonies and lyrics themed around love, cars and surfing, and soon became one of the era's best-selling groups. As their career progressed, the band's music also evolved, and in 1966 they released Pet Sounds; an album which incorporated more personal lyrics and a more sophisticated sound, and is now considered one of the most influential albums of all time. Throughout their career, The Beach Boys have charted over eighty songs worldwide, with thirty-six US Top 40 hits (the most by an American rock band) and four number-ones on the Billboard Hot 100 chart. They have sold over 100 million records worldwide.