One of the world's best-known and best-loved rock musicians, British icon Roger Daltrey comes to Mountain Winery Amphitheater on Friday 10th August 2018 for a night of “The Who hits, rarities, and solo hits”! With an illustrious career of chart-toppers like "My Generation" and "Pinball Wizard" and the charisma of a rock legend, it's no wonder Daltrey is considered one of music's greatest entertainers! 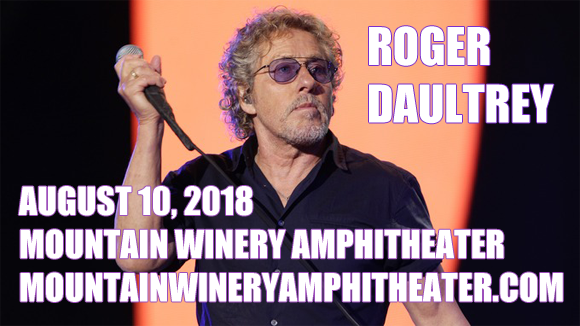 First finding fame in the mid-1960s as founder and lead singer of British rock band the Who, Roger Daltrey is an English singer, musician, and actor. One of the best-selling bands of all time, and widely considered to be one world's of the most influential rock bands, The Who had several UK Top Ten singles throughout the 1960s, '70s and '80s, including "My Generation", "Pinball Wizard", "Won't Get Fooled Again", and "You Better You Bet", among others. Daltrey has had a successful solo career since 1973, and has released eight studio albums, five compilation albums, and one live album as a solo artist. The recipient of two lifetime achievement awards as a member of the Who (one from the British Phonographic Industry in 1988 and the other from the Grammy Foundation in 2001), Daltrey was inducted into the Rock and Roll Hall of Fame in 1990 and the UK Music Hall of Fame in 2005.