"Sugar Man" himself, Rodriguez, comes to Mountain Winery Amphitheater on Sunday 19th August 2018! The now legendary Detroit-based singer-songwriter (and subject of the Oscar-winning documentary Searching For Sugar Man (2012)) will be performing hits from his noted albums Cold Fact (1970) and Hard Reality (1971), as well as delighting fans with a few surprises! Don't miss your chance to see the iconic bluesman live! 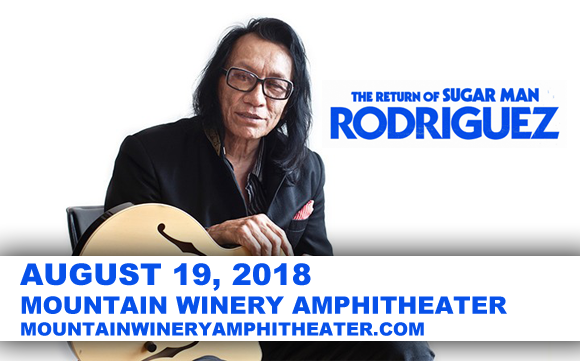 Subject of the 2012 Academy Award–winning documentary film Searching for Sugar Man, Rodriguez is an American singer-songwriter from Detroit, Michegan. After a short-lived music career in the United States during the late 1960's and early 1970s, Rodriguez retired from music, returning to demolition and production-line work. Meanwhile, unbeknownst to him, he had become a musical sensation in South Africa (as well as Australia, Botswana, New Zealand and Zimbabwe), where he is believed to have sold more records than Elvis Presley, and where several of his songs served as anti-apartheid anthems. Due to a lack of information on Rodriguez in the country at the time, a widespread rumor circulated that he had died after the release of his first album, until a group of South African fans found and contacted him in the 1990s. This led to an unexpected return to music for Rodriguez, whose career was further helped by the 2012 documentary, which brought him success in the US. He continues to tour regularly and his albums Cold Fact (1970) and Hard Reality (1971), which were reissued in 2012, have become internationally renowned.