Are you a lover of nuevo flamenco music? If so, the Mexican acoustic guitar duo, Rodrigo Y Gabriela, is undoubtedly one of the most popular artists that constantly invade your music playlist, right? Well, we could not blame you if you keep playing the rhythmic rock tunes of the Grammy award-winning duo on repeat. After all, there is a sense of excitement whenever one hears the flash, power, and speed of death metal tunes produced when the two passionate musicians play their instruments. Elevate your excitement this fall and experience their music firsthand at the Mountain Winery Amphitheater this September 16. Liven up your Friday night as you immerse yourself in the music and artistry of these two equally-talented nuevo flamenco stars. Come for the music, and stay for the passion, soul, and incredible technique of Rodrigo Y Gabriela. Get your tickets now! 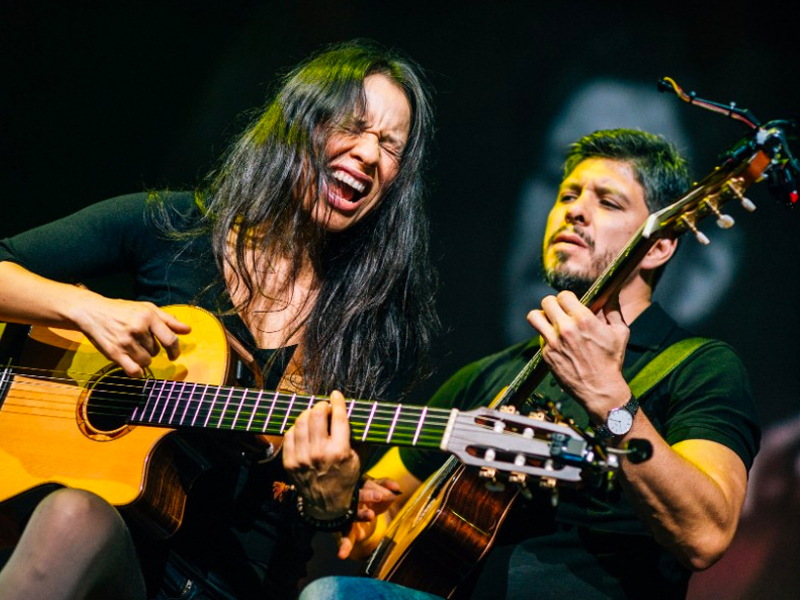 Acoustic duo Rodrigo Sanchez and Gabriela Quintero struggled to succeed in Mexico City when they decided to move to Dublin, Ireland, in 1999. They started to do gigs in many pubs and busking in different areas in the city, which the duo loved. In the following years, their career slowly attracted people's attention. By then, their songs were predominantly instrumental, making it difficult for them to get the interest of major labels. But continuing their style paid off in 2006 when their album "Rodrigo Y Gabriela" peaked at the top spot of the Irish Albums Chart, beating Arctic Monkeys and Jonny Cash. The band's momentum continued in 2009 when their album "11:11" gained popularity among American and European audiences, expanding their reach. In 2011, they were given the most significant opportunity in their entire career when they worked with legendary composer Hans Zimmer for the "Pirates of the Caribbean: On Stranger Tides" soundtrack. Three albums more, they finally won a Grammy Award for "Best Contemporary Instrumental Album" for their 2019 album "Mettavolution."

Metallica has influenced the duo's music, which is evident in their rock sound. They are known for utilizing acoustic guitars to produce rhythmic rock music. With such masterful technical skills, they create effortlessly unique and attractive tunes. The Independent commented on their works, saying that "Rodrigo y Gabriela's secret is maybe quite simple. They are resourceful musicians and are open-hearted, happy entertainers."

The two have been known to have impressive live performances, and many look forward to their tours. If you are one of those who are curious or want to see them again, your wait is over as they are back on the road. You can jam with the duo at the Mountain Winery Amphitheater in Saratoga, California, on Friday, September 16. Get your tickets now!