Don't miss your chance to see 80s legend Rick Springfield at Mountain Winery Amphitheater on Wednesday 8th August 2018! The "Jessie's Girl" singer will perform classic hits, as well as newer material from his recent album The Snake King, and will be joined in support by warm-up acts Loverboy, the Greg Kihn Band and Tommy Tutone! 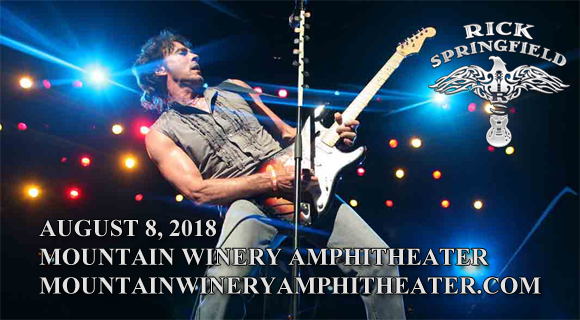 Australian musician, singer, songwriter, actor and author Rick Springfield began his career in the late 1960s as a member of pop rock group Zoot. Beginnings, his debut album, was released in 1972, but it was Springfield's 1981 single “Jessie's Girl” that served as his mainstream breakthrough. The single was a number-one hit in both Australia and the US and won him a Grammy Award for Best Male Rock Vocal Performance. Springfield continued to be a commercial success with the Top Ten hits "I've Done Everything for You", "Don't Talk to Strangers", "Affair of the Heart" and "Love Somebody", and in the early 1980s he charted two US Top Ten albums: Working Class Dog (1981) and Success Hasn't Spoiled Me Yet (1982). Springfield's latest release, The Snake King, will arrive in 2018.