A globally celebrated artist of endless talents, Josh Groban returns to Mountain Winery Amphitheater on Tuesday 3rd September 2019 for the second in a two-night-run of his Bridges Tour! The operatic pop crooner, who has an incredible flair for uplifting balladry, will be performing tracks from last year's album, as well as a variety of original and cover songs that will captivate the audience! 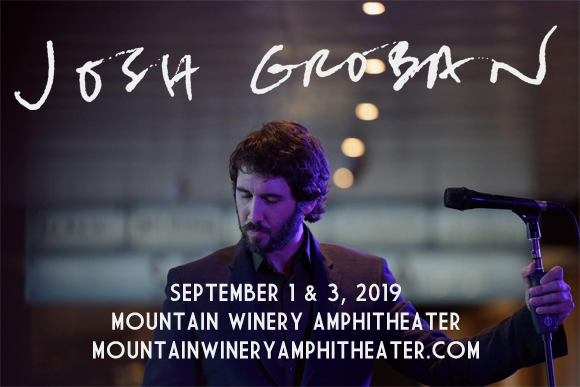 American singer, songwriter, actor and record producer began his career in the late 1990s, when a stint as a rehearsal singer for several high profile events lead to his big break. In 1997, Groban stood in for an unwell Andrea Bocelli in a duet with Celine Dion at the rehearsals for the 1999 Grammy Awards. Actress and comedian Rosie O'Donnell, who was the event's host, was impressed by his work and invited him to appear on her show the following week. Groban's appearance on O'Donnell's show led in turn to an appearance on Ally McBeal, which was one of the biggest TV shows of the time. A recording contract with Warner Bros. Recordings soon followed, via Grammy Award-winning producer and arranger David Foster's 143 Records imprint. His eponymous debut album was released on November 20, 2001, and was the first of four consecutive albums to gain multi-platinum certification for Groban. In 2007, he was charted in 2007 as the number-one best selling artist in the United States, with over 22.3 million records in the nation, and to date, Groban has sold over 25 million records worldwide.