Joan Jett and The Blackhearts Tickets

The Queen of Rock herself, Joan Jett, comes to Mountain Winery Amphitheater on Thursday 16th August 2018 with her infamous band The Blackhearts for a night of pure, unadulterated rock 'n' roll!!! Jett will be performing a full headlining set of hits like "Bad Reputation", and will be joined by San Francisco support act, Curls! 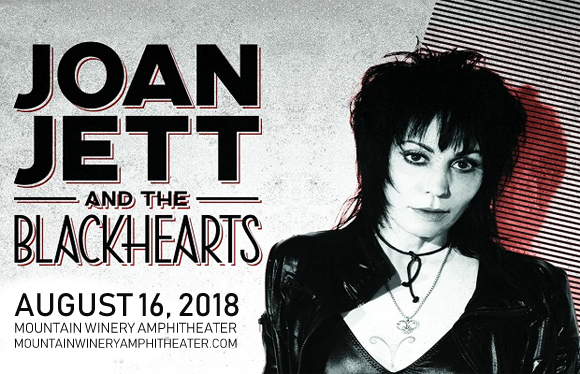 Known to many as the Godmother of Punk, Joan Jet is an American rock singer, songwriter, composer, musician, record producer and actress. Jett became popular in the 1970s as lead singer of The Runaways, and then made waves as a solo artist with her backing band the Blackhearts. She is known for the hit singles "I Love Rock 'n Roll" (which was number-one on the Billboard Hot 100 for six weeks), "Bad Reputation", "Crimson and Clover", "Do You Wanna Touch Me (Oh Yeah)", "Light of Day", "I Hate Myself for Loving You" and "Dirty Deeds". Joan Jett and the Blackheart's most recent album, Unvarnished, was released in 2013.