The musical circus is coming to town as anarchic gypsy-punk nine-piece Gogol Bordello heads to Mountain Winery Amphitheatre on Tuesday 31st August 2021 as part of their Lifers Tour! The larger-than-life agents of chaos combine a healthy dose of theatrics with phenomenal musicianship to create a show the likes of which you've never seen before! Expect non-stop fun, brand new music, and a night that you'll never forget!!! 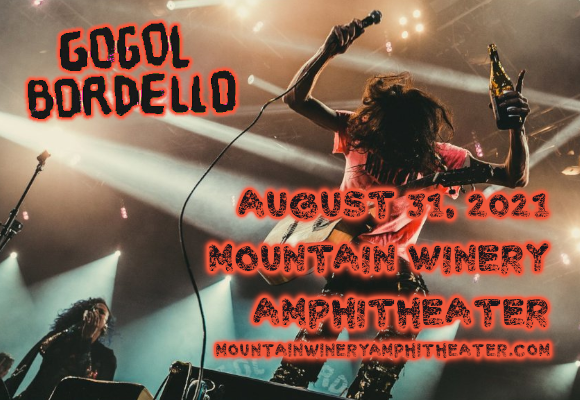 In the Lower East Side of Manhattan in 1999, Ukrainian-born singer, composer, disc jockey and actor Eugene Hütz teamed up with guitarist Vlad Solofar and squeezebox player Sasha Kazatchkoff to form the very beginnings of gypsy punk band Gogol Bordello. Over the following few years, performers from all over the world joined the band and they became known for their wild and flamboyant live shows. Voi-La Intruder, the group’s debut album, was released later in 1999 and  was produced by Nick Cave & the Bad Seeds drummer Jim Sclavunos. In 2007, the band gained mainstream attention with the album Super Taranta!, which was a critical success, making several end-of-year lists, including Rolling Stone. Three years later, Gogol Bordello made its mainstream debut with the Rick Rubin-produced album Trans-Continental Hustle. Seekers and Finders (2017) is the band’s seventh and most recent album, featuring Regina Spektor as a vocalist on the title track.