It's 'more than just a dream' when the indie-pop sensation, Fitz and the Tantrums, teams up with the man who got us singing 'nah nah honey, I'm good', Andy Grammer for a co-headlining tour. Together, they are set to bring "The Wrong Party Tour" to the stage at Mountain Winery Amphitheater on Thursday, 25th of August 2022. Joining them is special guest Breland. Get ready to fall in love with Andy Grammer's 'fresh eyes as he sings his best bops that made the world fall in love. Fitz and The Tantrums is set to bring you 'all the feels live on stage. You're definitely looking at the right party, so book your tickets now! 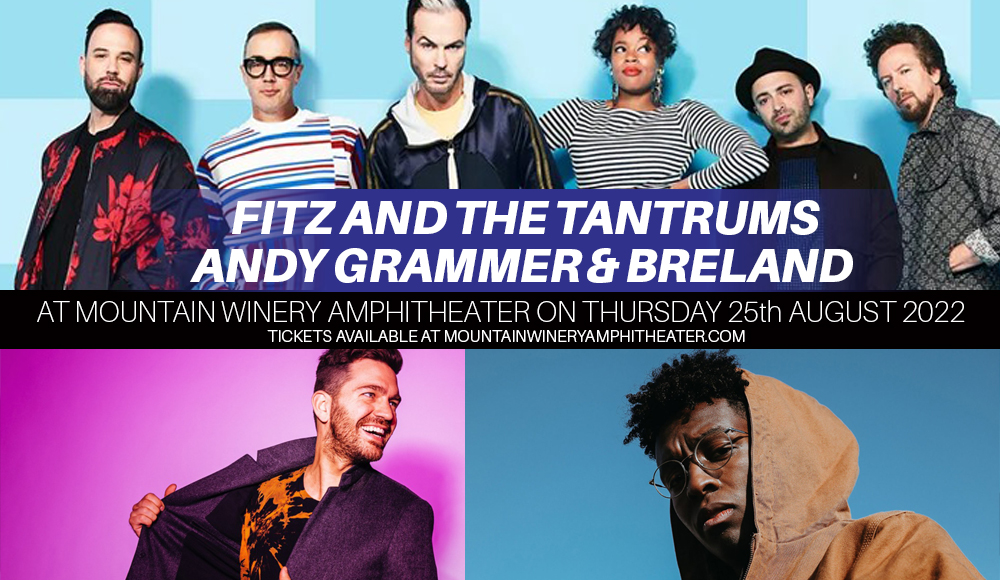 Fitz and the Tantrums is an acclaimed indie-pop band founded by Michael Fitzpatrick in 2008. He wrote the song "Breakin' the Chains of Love" the moment he bought an old electric organ. Contacting college friend James King, with his friend recommending more members, Fitz and the Tantrums was then born.

With music described as "soul-influenced indie pop", the band produced three RIAA certified Platinum hits namely "Out of My League", "The Walker", and "HandClap". Last 2019, they dropped their fourth studio record "All the Feels" featuring singles "123456", "Don't Ever Let Em", "I Need Help!", and "I Just Wanna Shine".

Co-headlining The Wrong Party Tour is the American singer-songwriter behind hit singles "Don't Give Up on Me", "Fresh Eyes", "Honey, I'm Good.", and "Keep Your Head Up", is Andy Grammer.

Andrew Charles Grammer hailing from L.A. has dropped bops that speak volumes to listeners' hearts. After the release of his debut album featuring RIAA Platinum singles "Keep Your Head Up" and "Fine by Me", he said:

"My ultimate goal is to try to be real. It just so happens that I’m usually more happy than sad when I’m writing. And in general I think that life is pretty great, and it’s cool to be here, so that comes through in my music. I don’t have a dismal outlook, but I don’t aim to make positive music. It’s just what I am." Andy Grammer told The Hollywood Reporter.

With uplifting songs that get audiences on their feet, Andy Grammer is set to bring that same positive energy to the stage on The Wrong Party Tour with Fitz and the Trantrums.

“We cannot wait to get our fans together with Andy’s fans this summer and get everybody dancing… The Wrong Party tour is gonna go down in history as one hot sweaty mess not to be missed,” said Michael Fitzpatrick.

This definitely is the right party for you! If you're ready to dance, sing, and have a good time, let Fitz and the Tantrums and Andy Grammer take over at Mountain Winery Amphitheater on August 25, 2022 by booking your tickets now!