'80s British heartthrobs Duran Duran are headed to Mountain Winery Amphitheater this summer, to perform two back-to-back shows! Performing the first show of their double run on Tuesday 10th September 2019, the iconic and award-winning new wave group will perform a lively set full of classic hits like “Girls on Film,” “Rio,” “Hungry Like the Wolf” and more, as well as some brand new material! 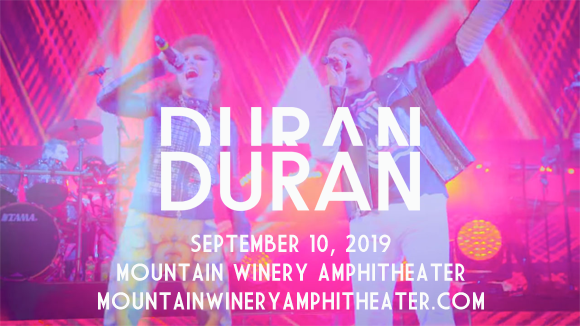 Formed in Birmingham, England in 1978, British new wave band Duran Duran were one of the most successful and iconic groups of the 1980s. Originally part of the New Romantic scene, alongside fellow British bands Spandau Ballet and Visage, the band was formed by keyboardist Nick Rhodes and bass guitarist John Taylor, with drummer Roger Taylor joining the following year, and after various line-up changes, guitarist Andy Taylor and lead singer Simon Le Bon joined to form the band's most popular and commercially successful line-up. The group's self-titled 1981 debut album brought them mainstream success, thanks to its third single "Girls on Film" and the accompanying music video, which was played on heavy rotation worldwide on MTV. The band's second album, Rio (1982), scoring four UK Top Twenty singles with "My Own Way", "Hungry Like the Wolf", "Save a Prayer" and the title song "Rio", and peaking at number 6 in the US. The band's innovation with music videos led to them becoming popular all over the world, and they were considered part of the  Second British Invasion of the US in the 1980s. They have charted 14 singles in the top 10 of the UK Singles Chart and 21 in the US Billboard Hot 100, and have sold over 100 million records worldwide. The group has also won several awards over the years: two Brit Awards (including the 2004 award for Outstanding Contribution to Music), two Grammy Awards, an MTV Video Music Award for Lifetime Achievement, and a Video Visionary Award from the MTV Europe Music Awards. They also have a star on the Hollywood Walk of Fame.