Five-time Grammy Award-winning, multi-platinum-selling jazz artist Diana Krall returns to Mountain Winery Amphitheater on Sunday 22nd September 2019! Performing on her 2019 Fall Tour, the endlessly talented performer will sing a variety of jazz standards and modern classics from her extensive repertoire, backed by her incredible band, some of whom are Grammy Award-winning musicians in their own right! It's going to be an evening of captivating music and high quality entertainment! 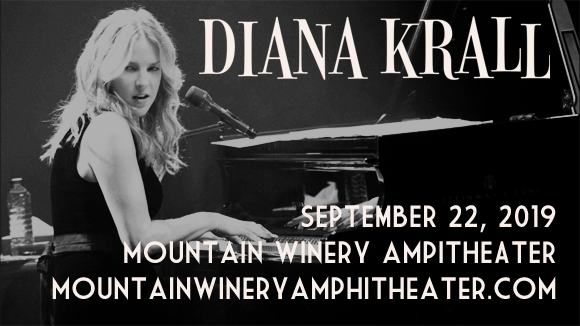 The only artist to debut eight albums at number one on Billboard's Jazz Albums chart, Diana Krall is a world-famous Canadian jazz singer and pianist. Krall's first release was her 1993 debut album Stepping Out, but it was 1996's All for You: A Dedication to the Nat King Cole Trio that brought her name to a wider audience, remaining on the Billboard jazz charts for an incredible 70 weeks and earning a Grammy Award nomination. Since her debut, Krall has won five Grammy Awards from eight nominations and eight Juno Awards, among many others. To date, she has had nine gold, three platinum, and seven multi-platinum albums certified by the RIAA, and has released 15 studio albums in total. Her most recent release was 2018's Love Is Here to Stay, which was a joint album with veteran singer Tony Bennett.