Not one, but two Latin-Mexican pop singers are embarking on a double headliner tour. Cristian Castro & Mijares are due to take on the stage of the Mountain Winery Amphitheater on Sunday 10th October 2021. The pop superstar which gave voice to the hit “Nunca Voy a Olvidarte”, Cristian Castro will share the stage with adult-contemporary pop artist Mijares, to give their fans from this side of town a sizzling and dazzling show that will surely create endless ripples of adulation from Latin music lovers. Save the date and lock in your tickets now! 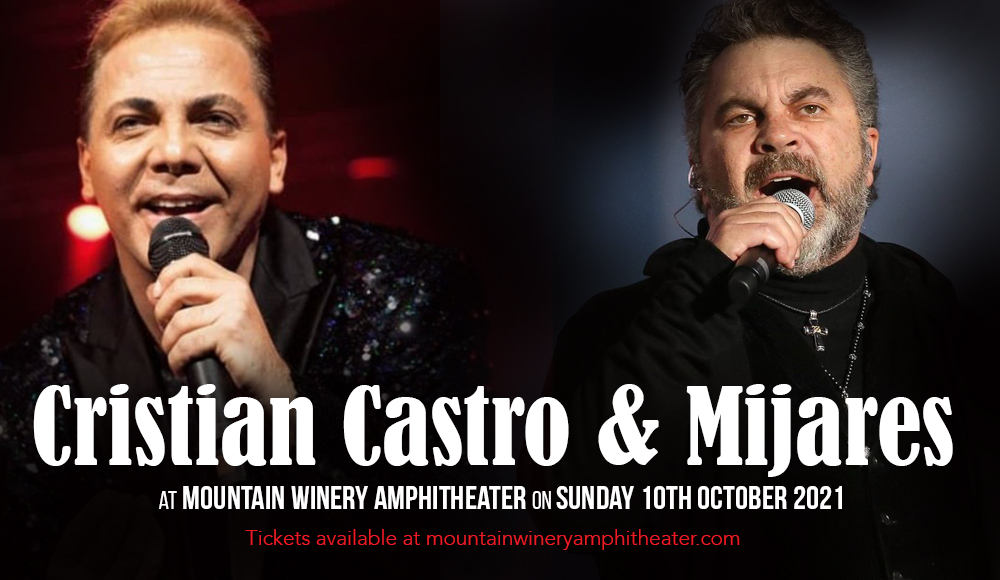 Cristian Castro belongs to the entertainment royalty of Mexico, so to speak. He seems born to do what he does. He made his acting debut as a baby in a telenovela, acted in TV commercials and performed on Mexican theatre musicals. Cristian Castro began his professional singing career at the young age of 18 with the release of his debut album “Agua Nueva”. The album's huge success in Mexico led to a grammy nomination for best Latin album. His succeeding albums expanded his reach to the Latin music audience, making waves in Puerto Rico and other Latin American territories and audiences. His single "Nunca Voy a Olvidarte" ("I Will Never Forget You") became his first number-one hit on the Hot Latin Tracks chart in 1993, elevating Castro into a status of teen idol-sex symbol-superstar. With numerous awards and chart topping hits tucked under his belt, Cristian Castro earned the regard and respect of his peers and music critics, recognizing him as one of the most skilled Hispanic pop singers of the last three decades. Juan Gabriel described Castro as "the man with the most faculties to sing in Mexico".

Mijares earned his dues, so to speak, clocking in countless hours learning the ropes and climbing his way up the ladder of stardom. He lived in Japan and performed in a nightclub, and worked as a background singer for Latin pop star Emmanuel. He released his debut album in 1986, which spawned the hits "Bella" ("Beautiful woman"), "Soñador" ("Dreamer"),[3] "Poco a poco" ("Little by little") and "Siempre" ("Always"). Since then, Mijares' singing career is fully decorated with numerous gold and platinum certifications, and he continues to perform live in sell-out shows.