Having made colorful waves as one of the most iconic new wave pop bands from the 80s, Boy George & Culture Club is back to slay it on stage on tour at Mountain Winery Amphitheater on Tuesday, 7th of June 2022. Catching the attention of the public eye with his gorgeous fashion statements and catchy pop hits, they've sold over 50 million records. Considered as one of the most representative and influential groups from the 80s, they've spawned several hits including "It's a Miracle", "Church of the Poison Mind", "Karma Chameleon", and "Do You Really Want to Hurt Me". Let the fabulous Boy George & Culture Club take you back in time as this 80s gem takes over. So, book those tickets now! 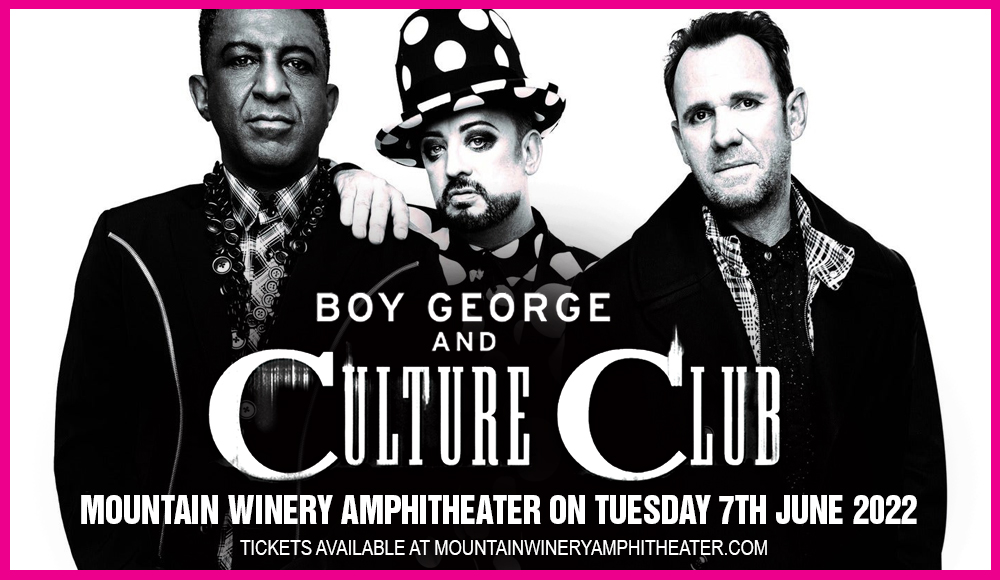 With his band, Boy George has made a mark in defining the 80s new wave scene. Surprising the media and the public eye with his flashy and unique fashion, Boy George-led Culture Club took the world by storm, selling over 50 million records. Their sophomore record "Colour by Numbers" sold over ten million copies around the world, making it to Rolling Stone's "100 Best Album of the 1980s" list.

With an Irish gay man on lead vocals, a black Briton bassist, a Jewish drummer, and an English lad on keyboards and guitar, they gave themselves the name "Culture Club". With a shaky start of recording demos and struggling to get signed at first, Virgin Records signed them in, though their first two singles were a miss. Their third single "Do You Really Want to Hurt Me" with a reggae-induced sound propelled marked the group's breakout success. It hit #1 in the UK in 1992 and topped charts across 23 countries.

From then on, Culture Club slayed and made huge colorful waves as Boy George hit magazine covers for his distinct style and fashion, and with Culture Club's hit tracks. More of their biggest singles include "Time (Clock of the Heart)", "Church of the Poison Mind", "Karma Chameleon", and "The War Song".

Having gone through some challenges, Boy George also dropped a slew of solo singles such as "To Be Reborn", "Bow Down Mister", and "Everything I Own".

With Boy George & Culture Club back stronger than ever, catch the queen, as flamboyant as ever, slay it on stage at Mountain Winery Amphitheater on June 7th. Book those tickets now!