Boy George & Culture Club are coming to Mountain Winery Amphitheater on Wednesday 19th September 2018 for the second night in a row! The British new wave sensations are gearing up for a mammoth 50 date tour, which will see the chart-toppers performing classic hits like "Do You Really Want to Hurt Me" and "Karma Chameleon"! 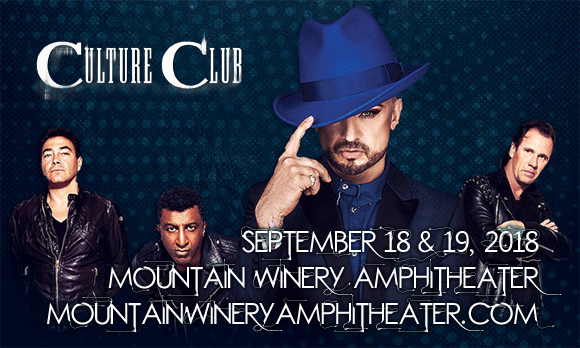 Formed in London in 1981, English new wave band Culture Club is widely considered to be one of the most influential and archetypal bands of the 1980s. Fronted by androgynous and charismatic lead singer Boy George, the group is best known for the hits "Do You Really Want to Hurt Me", "Time (Clock of the Heart)", "Church of the Poison Mind", "Karma Chameleon", "Victims", "It's a Miracle", "The War Song", "Move Away", and "I Just Wanna Be Loved". Culture Club has sold over 150 million records worldwide (including Boy George's solo albums), with over 6 million BPI certified records sold in the UK and over 7 million sold in the United States.