With his signature snarl, iconic look, and raging, punk rock sound, Billy Idol is a bona fide legend! The peroxide king will perform at Mountain Winery Amphitheater on Thursday 19th August 2021 in support of his brand new EP The Roadside, bringing to the stage classic hits like "Dancing with Myself," "White Wedding," and "Rebel Yell," as well as recent single "Bitter Taste" – his first new music in seven years! Book now to catch this icon LIVE! 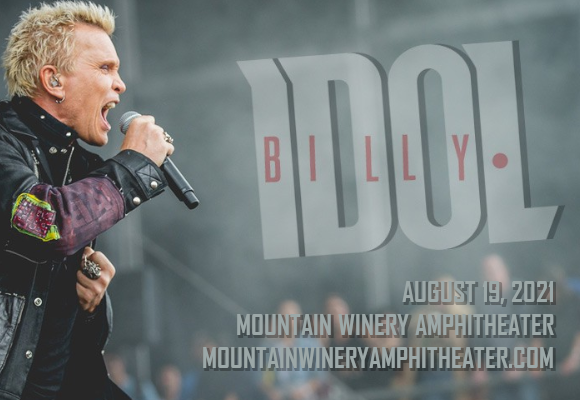 English musician, singer, songwriter, and actor Billy Idol began his music career in the 1970s, rising to fame as the lead singer of British punk band Generation X, with whom he released three studio albums and found popularity in the UK. In 1981, in pursuit of a solo career, Idol moved to New York City alongside guitarist and songwriting collaborator Steve Stevens. The following year, he released his self-titled debut album and enjoyed regular rotation on MTV (which at the time had only just begun) with the music videos for his popular singles "Dancing with Myself" and "White Wedding". His follow-up, Rebel Yell, was a major commercial success – it was certified double platinum by the RIAA and launched the hit singles "Rebel Yell" and "Eyes Without a Face". Whiplash Smile, his third studio album, was also popular, reaching number six on the Billboard 200. After the release of his fifth solo record, the 1993 concept album Cyberpunk, Idol left the public eye to focus on his personal life, returning in 2005 with the album Devil’s Playground and again in 2014 with Kings and Queens of the Underground, which is his most recent album and his highest-charting to date. Idol was featured as a guest vocalist on the song "Night Crawling" from Miley Cyrus' 2020 album Plastic Hearts. His new EP The Roadside is released in September 2021.