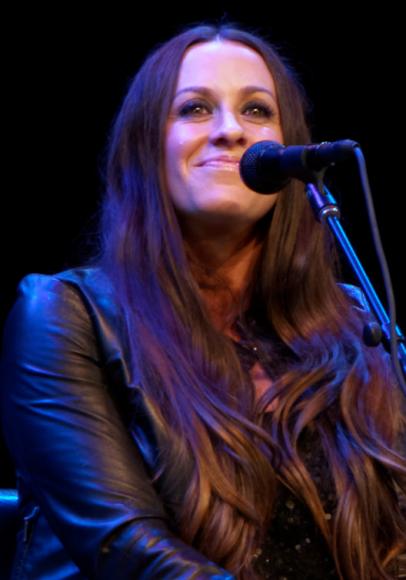 The talented songstress Alanis Morissette is one of the biggest names to come out during the 1990's. With her sensational songs she took to the top of the charts quickly and became a global star and a household name.

Born in Ontario, Canada to French and Hungarian parents shaped her initial music as they moved between places in Lahr Germany and back to Ottawa where she began to learn piano. During her elementary school years she developed her talents and was featured on the children's TV show, 'You Can't Do That' for five episodes and later moved on to writing her own songs.

Now as a singer, songwriter, multi instrumentalist, producer and actress she began her career in music during the start of the 1990's and quickly became known for her distinctive vocal style. She crafted a couple of dance-pop influenced songs but it wasn't until she moved to LA that her music truly developed into a chart topping success with her world-wide famous album, Jagged Little Pill. The record showcased her in full glory and lent more towards a rock influenced sound. With 33 million copies and counting, the album was a massive push into the limelight and gave her fans songs that they would have on repeat for years to come.

Now with a whopping total of more than 75 million record sales worldwide, Alanis formed creative control and produced four albums during the 2000's from Under Rug Swept in 2002, to her 2012 record, Havoc and Bright Lights.

This ""Queen of Alt-Rock Angst" titled by Rolling Stone will be heading to a stage near you this coming summer-fall as she takes to the road for a North America tour – book your tickets above for her live date at the Mountain Winery Amphitheater!