Love songs last forever. One of the timeless artists who made sure we'll have a boundless supply reservoir of love songs through the years is none other than the iconic duo, Air Supply. Graham Russell and Russell Hitchcock are now celebrating 47 wonderful years of bringing some of the most beautiful and meaningful love songs to this world. In 2022, Air Supply will mark this significant milestone with "The Lost In Love Experience". Experience a heartfelt and endearing show as Air Supply takes center stage at the Mountain Winery Amphitheater on Sunday 31st July 2022. Make sure you lock in your spot from where you'll experience Air Supply serenading the night with their greatest hits – "Lost In Love", "Making Love (Out of Nothing At All", "Here I Am (The One That You Love", "Now And Forever", and many, many more. Book your tickets now! 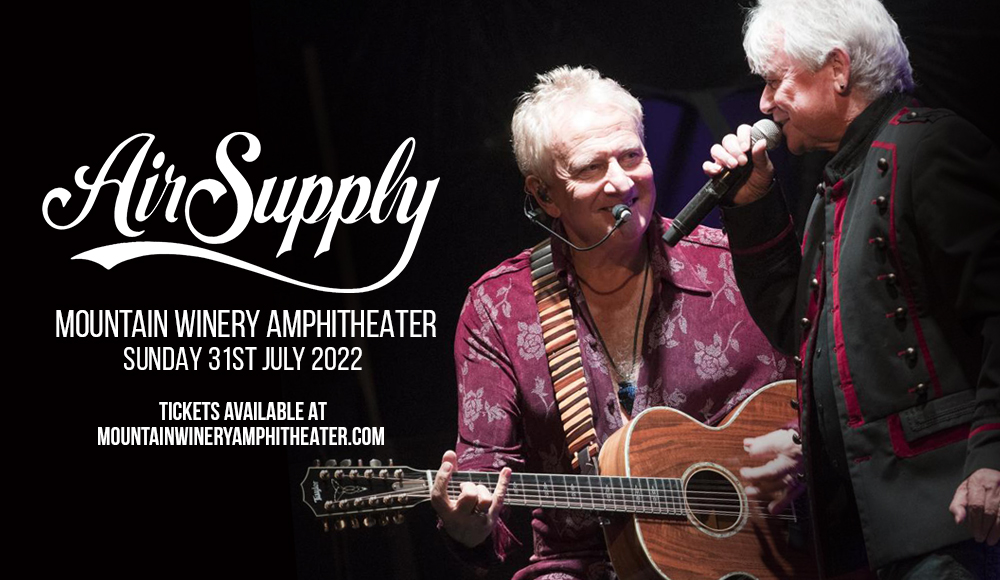 Air Supply has captivated audiences and music fans from all over the world with music they have uniquely and passionately crafted and perfected — love songs. Consisting of English-born singer-songwriter and guitarist Graham Russell and Australian lead vocalist Russell Hitchcock, the duo has made their mark with Russell Hitchcock’s soaring tenor voice and Graham Russell’s simple but majestic compositions, creating a uniquely emotional and tender-hearted sound that would be forever known as Air Supply.

"Lost in Love" is where and how it all began. The single caught the ear of music mogul Clive Davis, and a re-recorded and remixed version of "Lost in Love" was released internationally as a single in January 1980 on Arista Records. The associated album, Lost in Love, appeared in March and contained three US Top 5 singles, including the title track which peaked at No. 3 on the Billboard Hot 100. The other US Top 5 singles were "Every Woman in the World" (No. 5) and "All Out of Love" (No. 2). In 1981, Air Supply released the album "The One That You Love", with the title track going straight up to No. 1 on the Billboard Hot 100. It also featured two other Top 5 hits, "Here I Am (Just When I Thought I Was Over You)" and "Sweet Dreams". In 1983, they released their Greatest Hits album with a new single, "Making Love Out of Nothing at All", written by Jim Steinman. The song was one of their biggest hits ever spending three weeks at No. 2, and the album eventually sold 7 million copies.

Air Supply not only filled the airwaves but also blazed trails with their sold-out shows in many parts of the world. They were the first Western group to tour China, Taiwan, and countless other countries that before would not allow pop music across their borders. In 2020, Air Supply was listed at number 48 in Rolling Stone Australia's "50 Greatest Australian Artists of All Time" issue; following the duo's induction into the Australian Recording Industry Association’s Hall of Fame in 2013.

Air Supply's memorable and timeless hits will be here forever, but "The Lost In Love Experience" is a moment to enjoy here and now. Don't miss it!